In the latest issue of 1972, Toby Manhire surveys the repeatedly surprising career of Winston Peters, our maternity cover Prime Minister, and wonders: which Winston will we get?

For someone who styles himself as a straight-shooter, Winston Peters is one hell of a puzzle. To mangle the words of Winston Churchill, after whom he was named, Peters is a riddle, wrapped in a mystery, inside a double-breasted, pin-striped suit. At 73, he is a parliamentary ancient, yet brimming with puckish energy. He alternates between tearing strips off the media and charming off their pants. He is tangata whenua, yet rages against the “treaty industry”. A career insubordinate who demands unerring loyalty. A globe-trotting anti-globalist. A rattler of establishment cages who gets shuttled around in a ministerial limo.

Above all, Winston Peters is a survivor. Since he first stood for parliament in 1975, five years before Jacinda Ardern was born, Peters has been a box-office politician, promoted and sacked by prime ministers, embraced and rejected by electorates, but never submitting to the obituarists. This July marks the 25th anniversary of the New Zealand First Party, and of his leadership — and it comes at a moment when he’s never held greater power. Already, after choosing to coalesce with Ardern’s Labour Party, he had assumed the roles of deputy prime minister and foreign minister. With Ardern taking maternity leave, he goes one better, being sworn in as prime minister, albeit for what’s slated to be less than two months. It might have taken him a while, but he scaled his Everest eventually. The question now is: which Winston will we get?

Raised on a farm in Whananaki, Northland, Winston was the sixth of 11 children born to a Scottish mother and a Ngāti Wai father. He retains a house in the beachside settlement, and longstanding links across Northland. Forty years after he fought an inescapably losing battle as National’s candidate in the Northern Maori seat, those relationships would come in handy as he scored an upset victory in the 2015 by-election for Northland.

Peters first arrived in parliament in 1979. He’d narrowly lost the Auckland seat of Hunua late in 1978, but successfully challenged the result in the High Court. As the Muldoon government scraped back into office in 1981, Peters lost the electorate, but come the booze-scented snap election of 1984, he was installed in the safe blue territory of Tauranga, a seat he’d hold for 24 years.

Opposition suited Peters. As David Lange and Roger Douglas launched into a series of radical economic reforms, the member for Tauranga developed a reputation as a pugnacious but charismatic parliamentarian with a nose for controversy and a crisp suit. As Lange would put it, he was always “perfectly groomed – every grandmother’s idea of a young man on the make”. Peters had a taste, too, for a dram and a durry. He nurtured relationships with his political peers and the press gallery, often over late meals at the Green Parrot Cafe, one of the few Wellington institutions that’s been around longer than him. 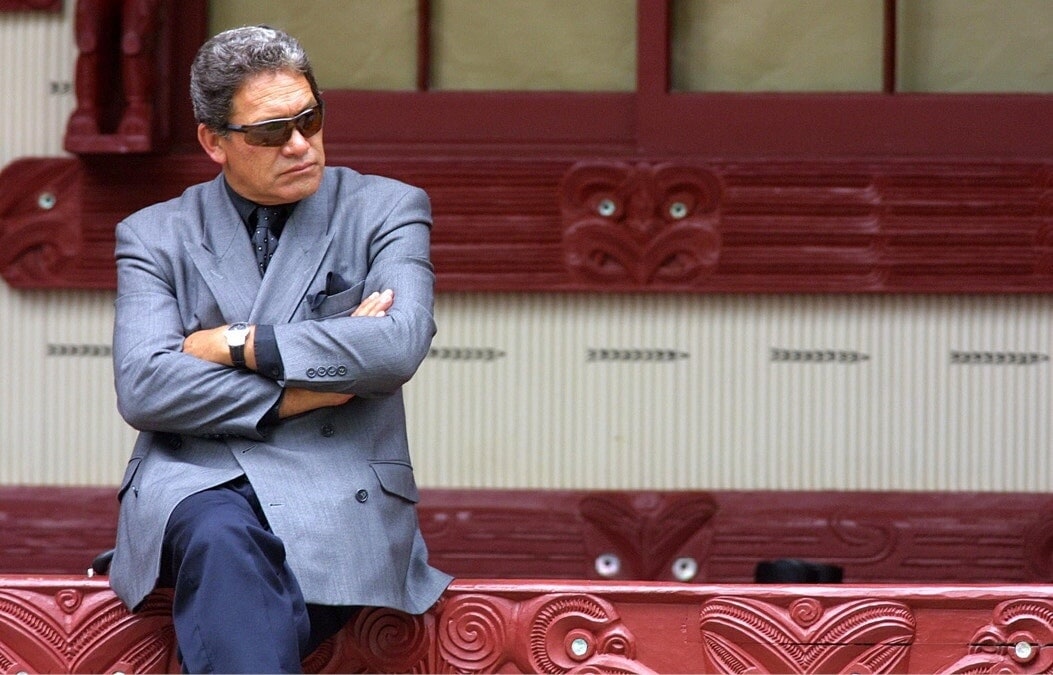 When Jim Bolger’s National Party replaced the Labour rubble in 1990, Peters was a cabinet shoe-in. But he didn’t last long. After repeated attacks on his own government over its economic policies and, especially, its attitude to foreign ownership, he was booted to the backbenches after just 11 months.

If Bolger imagined a chastened Peters might fall into line, he was in fantasy land. The matinee idol from Tauranga harangued his own party over its embrace of privatisation, foreign capital and immigration. In 1992, he was expelled from his own caucus, the motion seconded by a young MP called Bill English.

For Peters’ supporters, however, he was not the attacker but the attacked, a man of principle rounded on by his own. The value of that impression, according to his brother and one-time MP Ian Peters, was best explained by way of a farming metaphor. “His story is of getting a cow to mother a stray calf,” said Ian Peters, as paraphrased by RNZ. “Cows are reluctant to do that, but if dogs are set on the calf, the cow will always go to the infant’s aid, and the mothering begins.”

After Peters forced a byelection in 2003, Tauranga voters stood up to the dogs and rallied behind their newly independent candidate, returning him to parliament with close to 90% support. By the time the general election rolled around later in the year, the New Zealand First Party was born.

Over the next quarter century, New Zealand First would establish itself as a core part of our politics, thanks to its firebrand leader, but also thanks to the 1996 change to a proportional electoral system. From then on, as long as a party could capture a single electorate or 5% of the party vote, the MMP system would give them their share of parliamentary representation. Critics warned that it might also give them the ability to look the major parties up and down and decide which should govern.

And so it proved. As the joke goes, MMP is best explained as a system in which voters choose their preferred candidate and party, and then Winston Peters decides who wins.

That “kingmaker” scenario presented itself immediately. In 1996, NZ First took more than 13% of the vote — its best result, to this day — and the balance of power. Defying many predictions, Peters went with the party that had just given him the flick. He became both deputy prime minister to Jim Bolger and Treasurer.

Despite previous animus, Bolger and Peters got on fine. But when Jenny Shipley rolled Bolger, it turned to custard. Peters was sacked in August, 1998 and NZ First quit the coalition.

It wasn’t until 2005 that Team Winston returned to government. This time, the kingmaker swerved left. There was no formal coalition with Helen Clark’s Labour, but the confidence and supply deal was enough to secure Peters a major policy win with the SuperGold Card for pensioners, as well as the plum role of foreign minister — an appointment that was remarkable not just because he had assured voters he wasn’t the slightest bit interested in “the baubles of office”, but also because such a critical ministerial role was now filled by someone outside cabinet.

Again, Peters defied expectations. The talents honed at the Green Parrot were apparently just as effective in the gilded halls of diplomacy. And it no doubt rather suited Prime Minister Clark for New Zealand’s most irascible politician to spend so much of his time overseas.

Again, however, the ship hit the rocks, and Peters was stood down from his ministerial roles in 2008, pending a Serious Fraud Office investigation into party donations. It was at the peak of controversy around the funds, including from billionaire Owen Glenn, that Peters produced the most memorable visual aid in New Zealand political history: the giant word NO, brandished at a testy press conference. 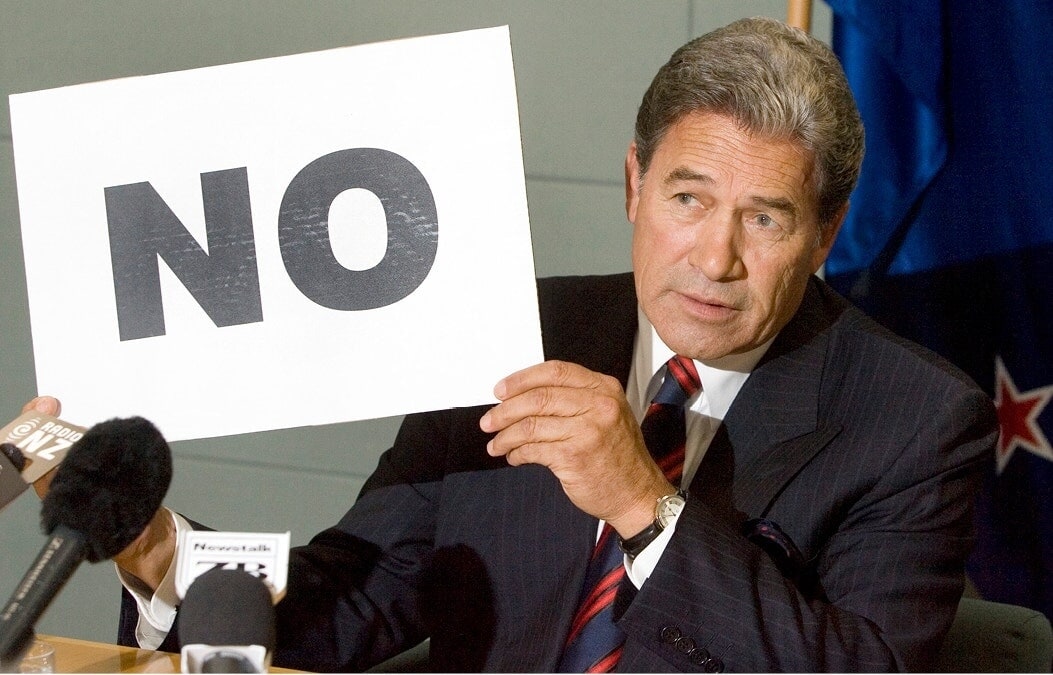 The writing was on the wall and in the general election that year, the electorate issued New Zealand First with its last rites. Surely. The party voted dipped below 5% and, with Peters losing Tauranga to novice National candidate Simon Bridges, they were a spent force.

But while NZ First disappeared from the national radar, Peters was busy working the halls and clubs of provincial New Zealand, preaching the message. When 2011 rolled around, he was suddenly back, pushing the buttons on immigration especially, and returned to parliament to put John Key to the sword. Yet again, Peters had defied gravity.

In the lead-up to the 2018 election, with white nationalism driving turbulence in Europe, Brexit in Britain and the election of Trump to the White House, it’s easy to imagine that Peters’ latest phoenix-like rise was powered by a global mood surge. But while there may be something in that — soothsayer Peters proudly notes that he correctly picked both the British vote to quit Europe and the US election result — parallels have often been overstated.

No doubt Peters has Trumpish characteristics. He likes ripping the shit out of the media, ideally unleashing grandiloquent put-downs such as his “smart alec, arrogant, quiche-eating, chardonnay-drinking, pinky finger-pointing snobbery, fart blossom” critique of one journalist.

But unlike Trump, he understands what is theatre and what isn’t. As often as not, the coda to a brimstone diatribe emptied upon some poor hack is a coruscating grin, the grin of the Cheshire Cat, a grin which “remained some time after the rest of it had gone".

And whatever characteristics Peters might share with Trump, they pre-date the MAGA tide. Peters and his party, with MMP, may have provided a populist safety valve. The anti-immigration, anti-globalisation sentiment and the nostalgic yearning for a lost idea of nation had an outlet in NZ First. Unlike the US or UK, they had their representation in parliament. Peters had been running similar lines for years. His campaign broadcast 22 years ago concluded with the words, “Let’s make New Zealand great again”.

While at his dog-whistling worst, Peters has proved a horrible xenophobe, feeding racism in New Zealand, he is no Donald Trump or Marine Le Pen. Or to put it another way: if he’s the Aotearoa incarnation of that strain of thinking, we should probably count our blessings.

And while Peters may be no social liberal, he is far from the “far-right poison” described in a spectacularly bad Washington Post editorial last year. Indeed, shortly after the birth of NZ First he contemplated a merger with Jim Anderton’s left-wing Alliance. (The idea didn’t get off the ground, in part because Peters refused to negotiate in person, preferring to communicate via fax.)

There is no doubt that, as foreign minister, Peters has his work cut out for him. The geopolitical powderkegs are everywhere, from North Korea and the South China Sea to Russia, Syria and a fragile Europe. There’s also the small matter of a volatile social media enthusiast in Washington. Peters was under pressure early on for a perceived lag in joining British condemnations of Moscow over the poisoning of an ex-KGB spy. Throw into the mix the NZ First enthusiasm for a trade deal with Russia and the Trump comparisons are again alluring. More plausible, however, is diplomatic gossip which suggests that the only collusion between Russia and New Zealand is the penchant for both country’s foreign ministers to sneak out of summits for a cigarette.

For the future of NZ First, what happens at home is more important — especially in the regions, where a multi-billion-dollar fund was the most heralded of the party’s coalition concessions. The pressure will be on Shane Jones, who’s been tipped as Peters’ successor, and who’s perhaps the only man in the country with a more bombastic rhetorical style than his, to deliver the goods. Either way, it’s safe to expect bursts of insubordination from New Zealand First, contrived or not, in an attempt to stave off the fate so often delivered to support parties under MMP.

As for Peters himself, there could be no sweeter quarter-century anniversary present than a stint as prime minister. He’ll no doubt use the opportunity to push NZ First priorities, the interests of the nation and all that. It’s likely, too, that his grin upon being addressed as PM could power the national grid.

By the time the next election arrives, Winston Peters will be a 75-year-old former prime minister. He’ll have a legacy locked in, maybe. He’ll have a succession plan cemented, maybe. And recognising the sun has set on a formidable political career, with a keen sense of timing and an oratorical flourish, he’ll announce his political days are over. Maybe.