When the summer holidays roll around we tend to stick to what we know: the same trusty bach, the same surf, and the same hikes. This summer, why not take your crew somewhere different?

Going somewhere else for the summer doesn’t mean exploring the great unknown: it could just mean popping to the next beach over. With the help of our summer guides, Northland fisherman Sam Birch and Auckland-based chef Makoto Tokuyama, we’ve made a list of some of New Zealand’s best-kept summer secrets.

This spot up near Leigh is where the land north turns around to face the open ocean. It’s one of Birch’s favourite stretches of coast. “It’s high-energy,” he said. “Calm waters on one side of the Cape will be rough just around the corner.”

He recommends exploring the area on a kayak or a paddleboard, launched from the nearby Goat Island. The island is a marine reserve, and its proximity to Cape Rodney means this exciting patch of coast is filled with sea life.

Birch can’t get enough of the animal life: “there’s big schools of kahawai, seals, often dolphins, a few bronzies [bronze whaler sharks], and depending on the time of year, even orca.”

On the shores, greywacke cliffs and caves are rimmed with pohutukawa and populated with nesting shags and gannets.

When you think of Taranaki, you think of the mountain. This summer skip the summit climb and head over the hill to the Pouakai ranges, where lush forest, hidden pools, and unbeatable views cling to Mt Taranaki’s side.

The full 25 kilometre track takes two or three days to walk, but it’s worth it for a glimpse of land not normally associated with this surf region. The volcanic soil breeds strong trees and vines, and ancient lava flow spots remain visible underneath waterfalls. The Ahukawakawka swamp is surrounded by golden alpine tussock, and the Kokowai stream runs red with magnesium oxide.

It’s a little eerie and out-of-this-world, but the DOC huts along the tramp are well-maintained and well-travelled in summer so there’s no need to fear being trapped alone on a mountain. 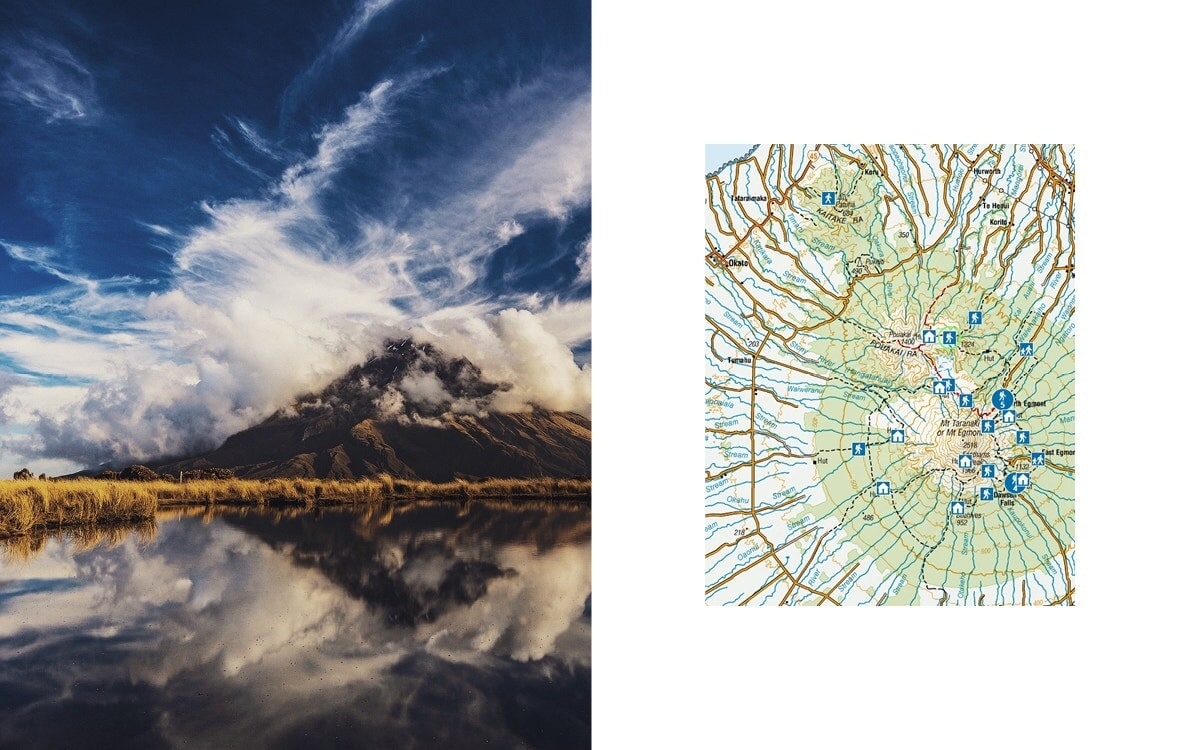 Another of Birch’s favourite getaways is this Warkworth mountain tramp, which makes up the local section of Te Araroa. Skip the Matakana markets and instead take a wander where the locals do.

Birch says that if you’re in the neighbourhood, the closest access point is Omaha Valley Road. “Hiking through regenerating native forest, it offers a pretty exceptional outlook throughout the trail, with views over Matakana, Omaha and the Hauraki Gulf.”

It’s only an hour and a half to the summit, but you can go further if you’d like for a full three-hour tramp from Omaha Valley Road to Rodney Road. Afterward, cool off at one of the beaches you spied from the mountaintop.

About forty-five minutes’ drive out of Dunedin city and around the peninsula you can find a wartime relic: a never-used military bunker complete with gun emplacements and subterranean tunnels.

Take a torch with you, and then go for a tramp on the grassy knolls outside the embankments. If you peek into the cliffside caves just outside the fortification, you can sometimes find a nesting little blue penguin. On the shores below you’ll hear massive Otago seals barking.

With black-out dark tunnels and sheer cliffs outside it, it would be easy for Harington Point to be creepy. Instead, around the corner from an albatross colony and covered in bright-coloured graffiti, it’s a bizarre reminder that things get better. 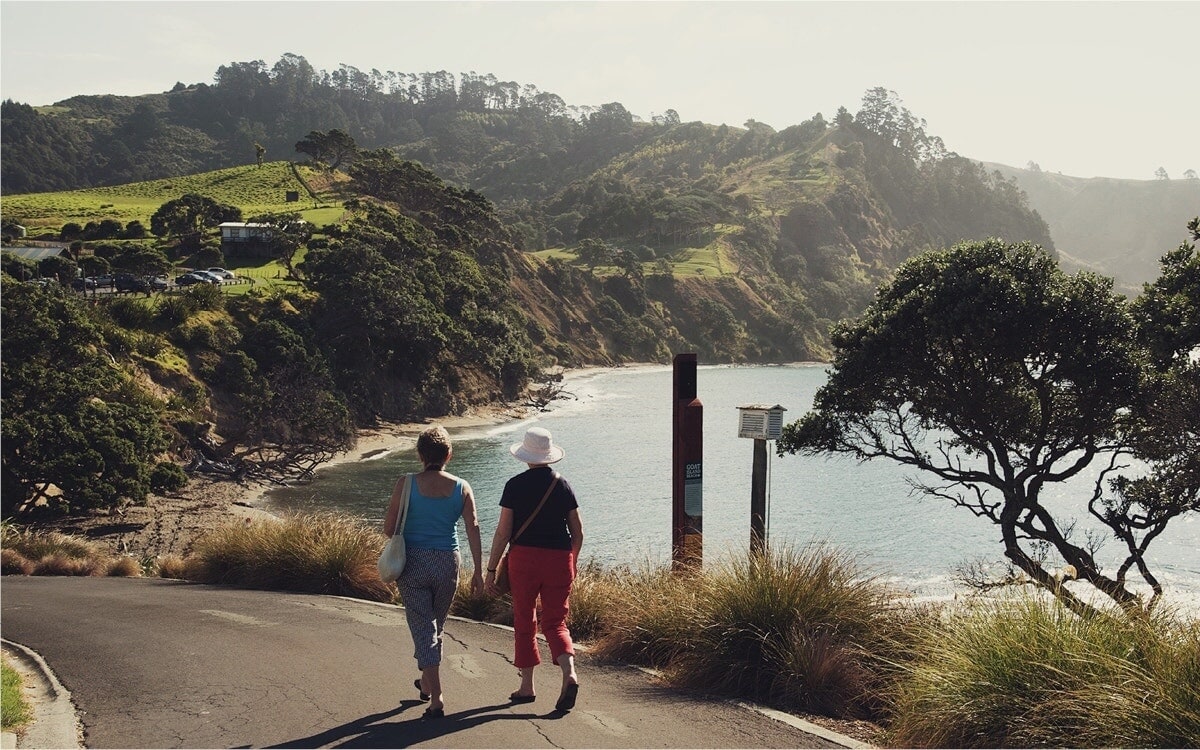 Tokuyama takes every opportunity to wax lyrical about this white-sand northern beach, one of the places he and Birch surf together.

It has reliable surf for those who don’t want to spend all day hunting the perfect wave, a lagoon for kids to paddle in, tide pools full of kina and anemones, and you can even fish off the rocky heads at the end of the beach.

Nestled just below Mangawhai, it’s an easy drive up the coast from Auckland. “I always like to be near water,” said Tokuyama. “I travel by coast whenever possible.” This sometimes means taking the long way, but Te Arai is a destination worth the trip no matter which route you take. 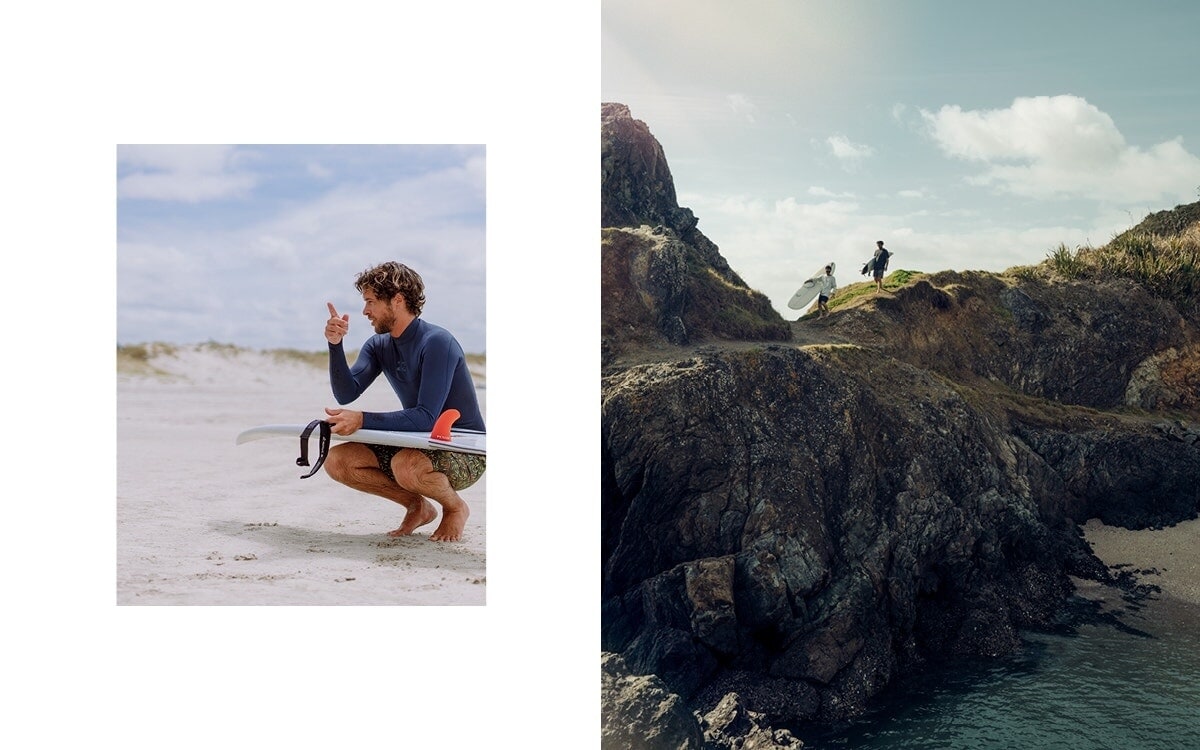 In the quiet surrounds of Karori lies an even quieter scenic reserve. Get off the paved pathways of suburban Wellington and into the ecosystem that stretches from Khandallah to Johnsonville Parks.

Despite the novelty of being a massive, bird-filled native forest in the middle of our capital city, Johnston Hill isn’t used often; the entrance is off a side street in a suburb tourists don’t spend much time in.

Take a picnic and make a day of enjoying Wellington’s views: the harbour, the hills, and the South Island are all visible from the summit.

The Marlborough Sounds are full of great walks, but the short trek to Emerald Pool is a must-do for anyone craving a cool plunge. The Pelorus track is part of Te Araroa and usually takes 11 days to hike, but if you’re just looking for an easy afternoon’s bushwhacking then jump onto the track at Pelorus Bridge.

Walk past one of the region’s last remaining podocarp-beech forests, trees with ancestry that stretches back millions of years to when we were part of a supercontinent. On the other side of you flows the Pelorus river, home to both rainbow and brown trout; above the bridge is a great fishing spot.

Just as the easy walk starts to build a sweat on your back, the pool appears: crystal-clear green waters glimmering in the sun, ready to lap at your sore muscles.