Father’s Day Special: Two Kids For The Price Of One

In June Simon Day learned he was going to become a father – to twins. To find out what he was in for he spoke to Jay Reeve about his first five years raising twin boys.

I’ll never forget sitting in the dim of the radiology theatre at our first baby scan, staring at the strange black and white image on the ultrasound machines screen trying to work out what I was seeing. I thought I could make out a head, maybe a couple of legs.

“That’s your baby, and it’s got a good strong heartbeat,” the radiology nurse said as she moved the wand over my wife’s stomach. “And that’s your second baby. Yes, you’ve got twins.”

After a moment's shock, my wife burst into tears and I burst into hysterical laughter. Twins!

After the scan we drove around my office’s neighbourhood over and over again trying to comprehend how our lives had suddenly changed forever. It was perhaps the most unexpected, joyous, and intimidating surprise we will ever receive.

Ahead of Father’s Day and five months out from our due date I spoke to one of my favourite fathers – Jay Reeve – about how his first five years raising twins, Oscar and Hunter. I asked jay about what my new role is going to look like, and for any tips he has for raising two children at the same time.

It starts with 100% excitement, and peels back to about 30%. First people are like “that’s amazing,” then they think “oh shit, I’ve got one kid and that’s hard work and you’re going to have two.”

When you say the word twins it’s such a happy word. What it actually means is you’re having two babies at the same time. When you put that lens on it, that’s a spicy wee meatball.

You’ve got to be 100% excited. Just go in really hot and blind. It’s like sprinting in the dark. Every now and then you will collect a low branch.

Just get up and start running again?

It’s amazing when we look back on how we managed to pull ourselves through that initial period. We operated on a cycle that was two hourly. The boys would feed for 45 minutes, then they would scream for 45 minutes while I swaddled them, changed them and put them to sleep. Then repeat.

Anna was like a crate sow, propped up in bed. It was gnarly. She was just broken. She lost 13kgs during pregnancy. She grew two humans. She just got absorbed by the boys. It’s a pretty amazing thing. But when they were born she was just wrecked. 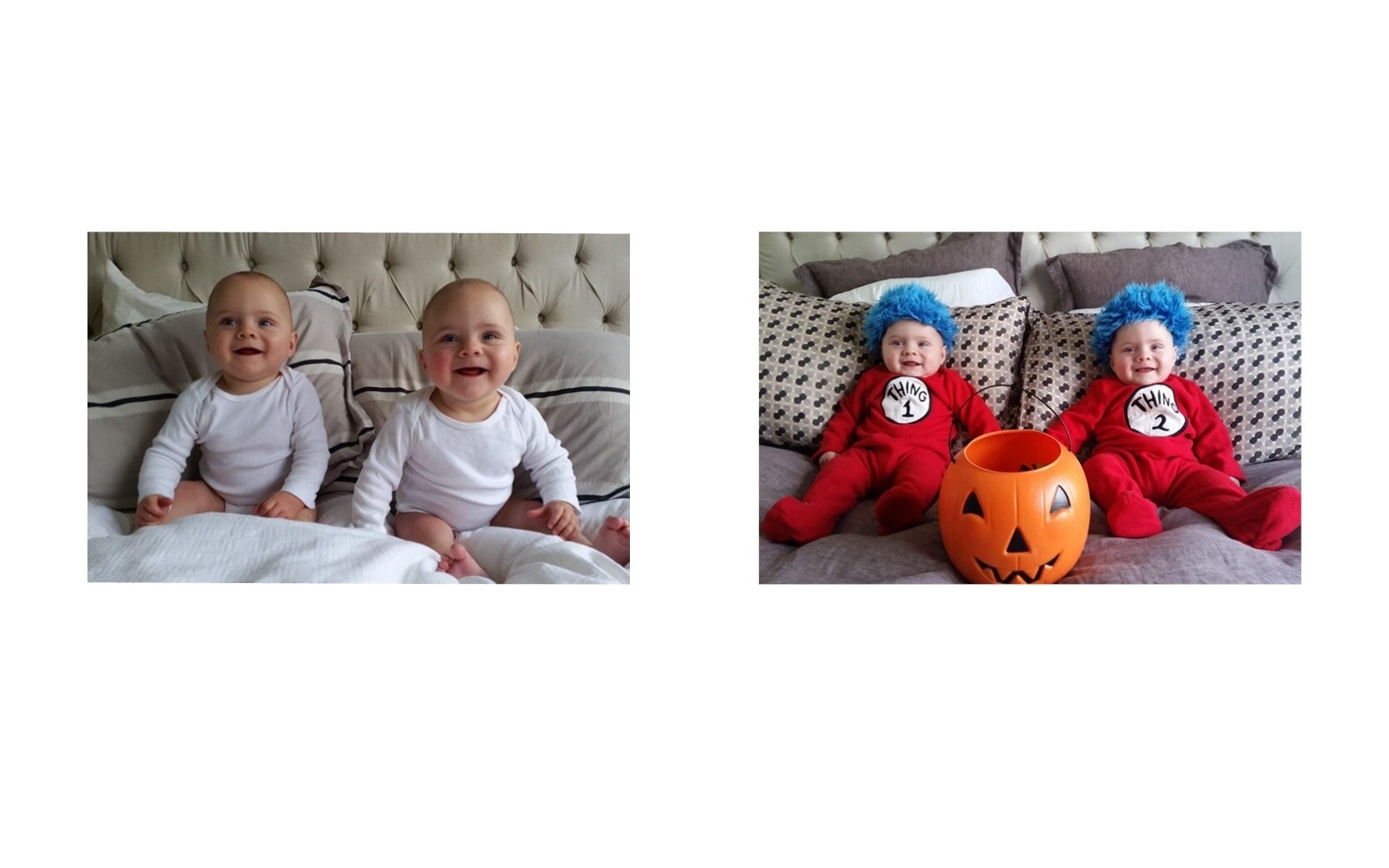 Then there’s all the stigma after you’re born and you’re supposed to look at these children as beams of light and love them. They’re just screaming flesh bags doing nothing. They’re not letting you sleep, you can’t eat.

You need to realise when you’re tired and you need to look after each other, because you can’t be angry at anyone other than that person in front of you.

It’s been really interesting how as soon as you tell people you’re having twins, one of the most deeply personal experiences becomes public property and people seem to think they’re allowed to share your news and speculate about how you conceived like it’s common gossip.

It’s amazing the questions you get when you have twins. When they’re newborn, people will see a twin pram and come and peel up the cover while their sleeping and look at them. And then they’ll ask: “Were they IVF or natural? Did you have them vaginally or C-section?” People will tell you about how “children pick up most of their immune building properties by being born vaginally.” Well it’s not necessarily an option and when you’ve got twins you just want control of that one thing.

Everyone has the best intentions, but all you really want is someone to turn up and hold the kids for a bit. Or you just want someone to come round and sit on the couch and watch the Warriors with you.

How have the last five years gone?

It breaks down: that first six months is gnarly. That first year you feel a sense of achievement.

At the 18 month mark you think you’ve got it all worked out. At two it gets a bit better, then at three it gets slightly worse again because they’re starting to form opinions, which is actually kind of exciting. Then they get to five and there starts to be some independence. 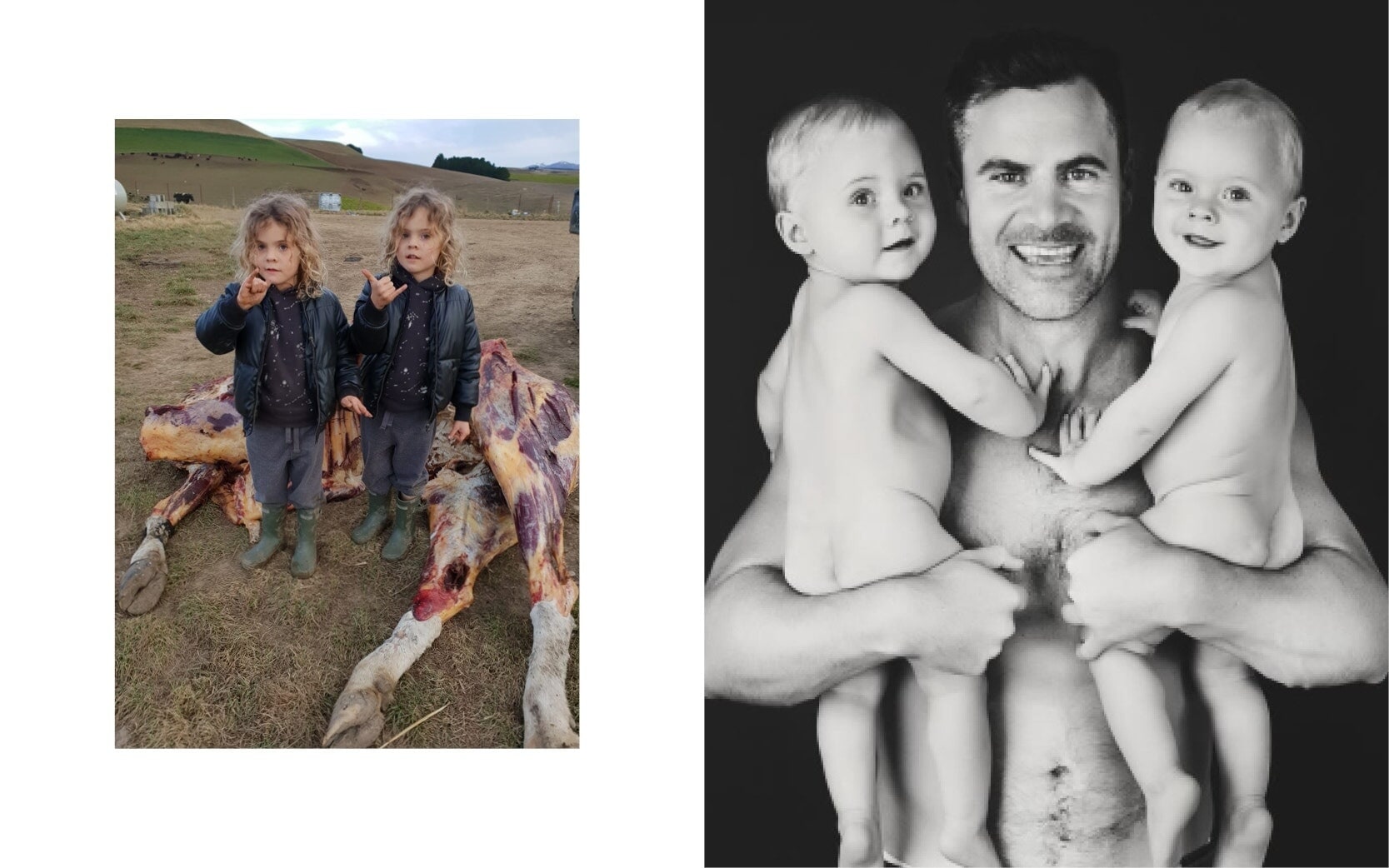 How have the boys responded to being twins?

They’re just thick as thieves. They’re best mates and worst enemies. A lot of their emotional resilience is propped up by one another. You never really have to take anything on because if someone picks on you, your brother steps up.

How do you define your approach to parenting the boys?

I think the most important thing for Anna and I was coming to a heads of agreement of how we were going to do things. We always back each other.

And just making sure you don’t get to a point where you’ve had enough. So giving each other the time to do stuff, and having interests outside of it means that you can keep cool, and if you keep cool you can see things a lot more clearly. I think that is the key: just be chill.

What have you tried to teach the boys as they grow up?

It always boils down to the common necessities of being kind and caring and caring about your environment.

When we go down to the beach at the Mount, we pick up rubbish all the way to the beach and put it in the rubbish bin. Then we stand in the sea and let our bodies charge up in the salt water. They get that. They understand that this is a place they need to look after. Probably more so than we ever did.

It’s those fundamentals. It’s the first 900 days. It’s why we were lucky because we both got to be there. And they’re very well socialised kids, they’ve got great manners. And they say good morning to everyone they walk past in the morning. 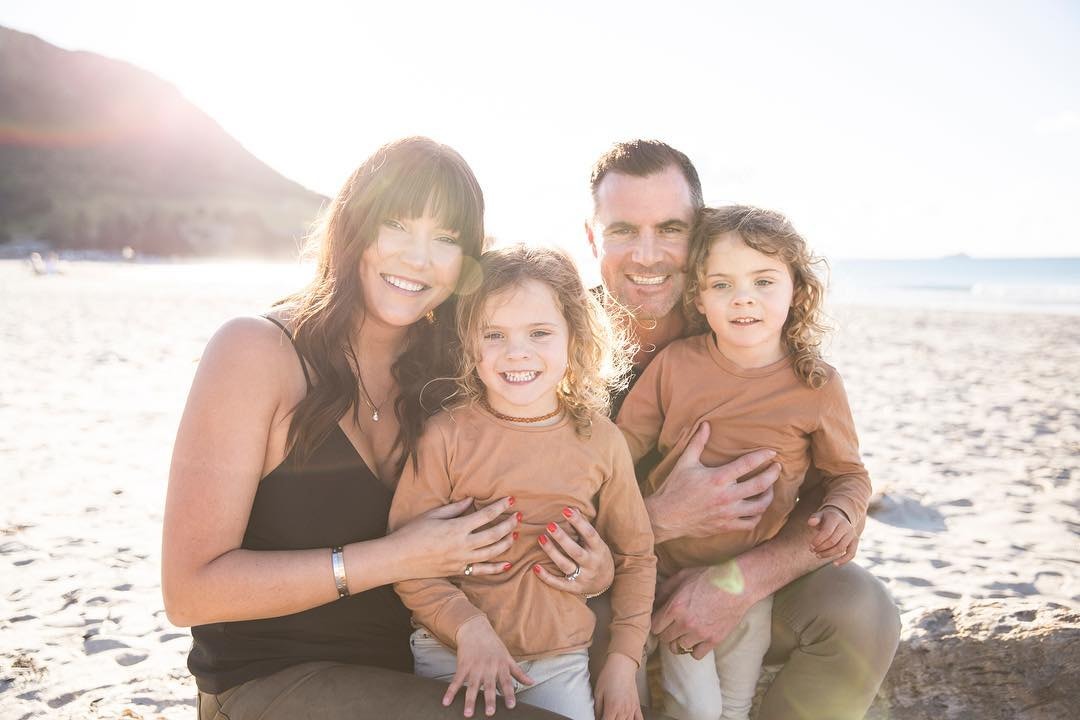 How much has having twins changed the way your life has worked in the last five years?

It’s definitely a lot more expensive. There’s no handing down from brother to brother. You get a multiple birth discount – which is something you definitely start asking for. We imported nappies from the US and had a palette under the house. We were going through 20 per day.

After having two it’s impossible to imagine not having twins. When Oscar was sick and in hospital, without both of them there together it was heart wrenching. Then you start to think if it was just one, or something happened to one, that’s half of you gone. They’re literally a genetic mapping unzipped.

Do you know if yours are identical?

They’re dichorionic diamniotic and have their own sacs and placenta and are more likely to be fraternal (non identical) but we won’t know until they’re born. Do you remember the boys developing their unique personalities?

Oscar and Hunter are 99% identical, but 100% opposite personalities. Both have the same traits in terms of being kind and caring. But then Hunter can manipulate a situation and construct the best outcome for him. Even as a baby he’d be able to get stuff by manipulating the situation. Which makes me proud because that’s how I operate. And then Oscar will always placate a situation for Hunter. If his brother is upset he will always give him what he’s got to make him feel better. Oscar is fearless.

What’s the longest they’ve spent apart? Do they know it when they’re not together?

A couple of days. We try and do stuff with them individually as well. So Oscar and I will go for a bike ride, or Hunter and I will go and kick a ball around. But they’re always wondering what the other one is up to.

They have different mates at school and they will range around, but just clock where each other are and make sure they’re cool and then continue on doing what they were doing. There’s always  a giant bungee cord between them at all times. They always have to check back in on each other. Which is cool.

The boys were in the same bed when they were born, and were for ages. They’re in the same room now. They fall asleep holding hands in the car. It’s so cool. 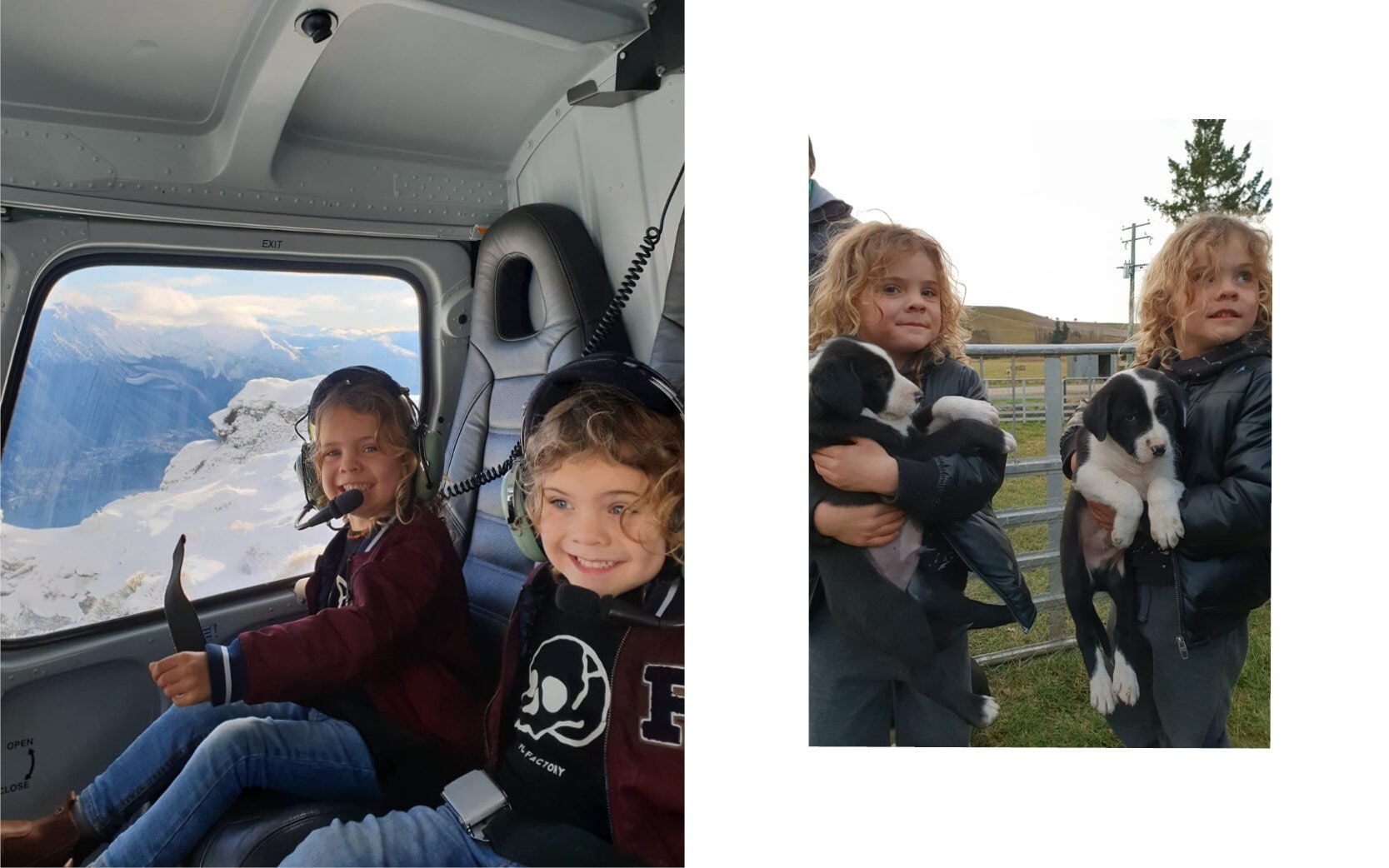 Do you think they ever get frustrated being identical twins?

Yep. All the time. People confuse them; even we do it. I’ll be looking at Oscar and call him Hunter, and vice versa. Imagine if you’re forever being referred to as your brother. And you’re always referred to as “the twins”, not as individuals.

That’s already happening with us before they’re born.

That would be tough when you’re trying to make it as an individual and you’re always referred to as that duo. I’m sure they’ll make it work to their advantage though.

How have the boys changed you?

It’s definitely taught me not to be so selfish. Now when I ride my motorbike I wear a full-face helmet, and I wear a jacket. Before the kids I used to ride around in a t shirt and open-face helmet.

Now I have a purpose. I have someone who depends on me. It only makes you better. You create a better version of yourself. I’m not sure if it was needed, but it’s been 100% welcomed.

Is the dad bod is a real thing?

The dad bod is 100% a real thing. I’ve never been in good shape, but I was in terrible nick after the kids were born. It looked like I was the one who had the kids.

Any final words of advice?

Just enjoy every second. You’ll never get them back. Eighty per cent of the time you’ll spend with your kids, in your entire life, is between zero and 18. We are a third through that almost. That’s frightening. So if you don’t cherish every single second your squandering it. 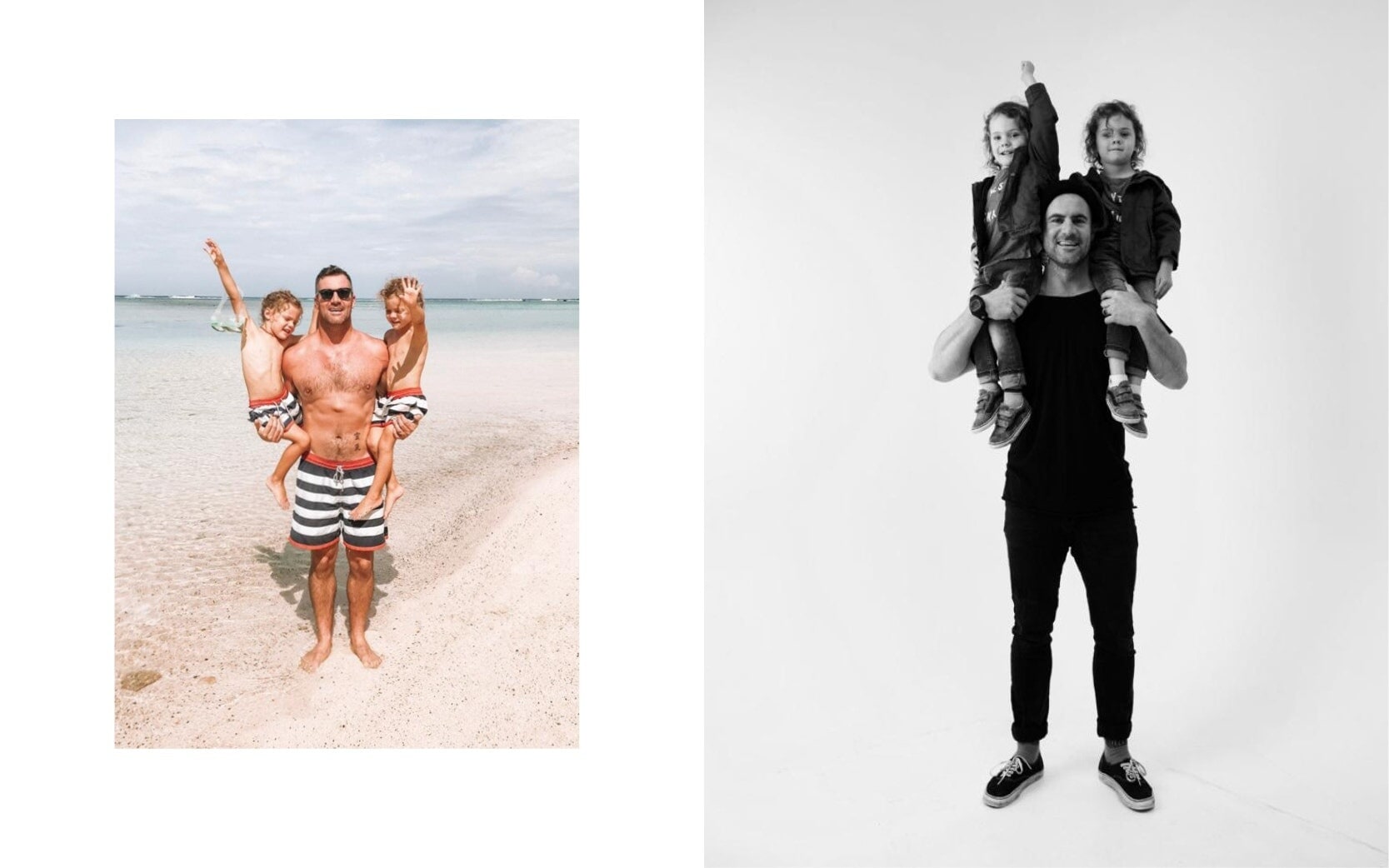